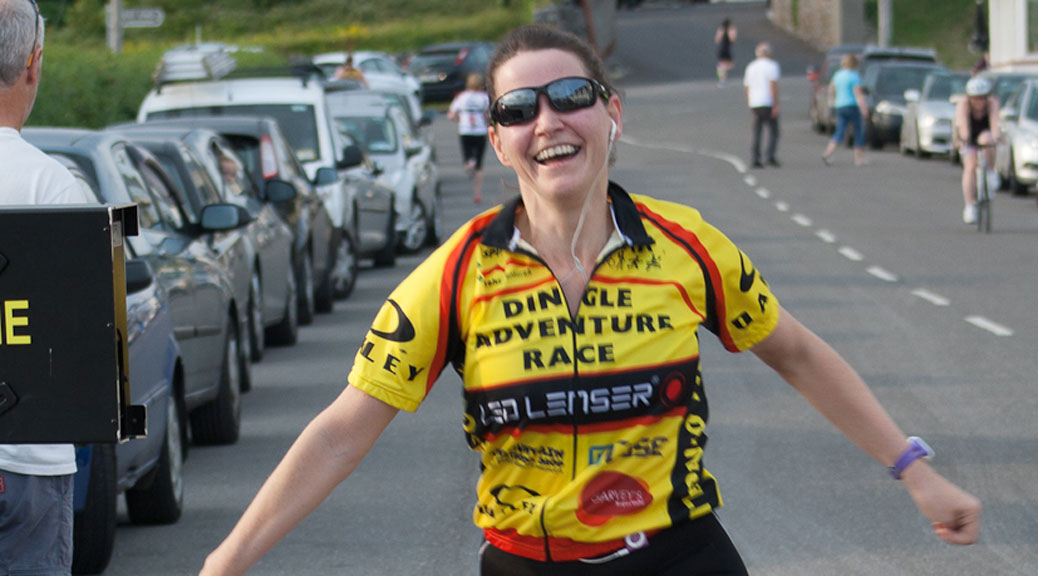 In my wildest dreams I would not have believed this time last year that I would have completed a Sprint Distance Triathlon by the end of this summer! I have known people involved in Triathlon for a number of years now and they were always firmly placed on a pedestal too high for me to climb.

This time 2 years ago I decided it was time to learn to run a 5km! I had narrowly avoided back surgery and the advice was that getting fitter would help strengthen it. I snuck into Marcus Howlett’s Born to run marathon training group with the intention of doing the 8 week training programme to get me to the 5km mark. Within a day or two he had me convinced I could run a marathon. Despite persistent ITB issues, a torn hip flexor which halted training for 6 weeks and crippling back pain I did it! I even had to wear a back brace on the day but I still did it. 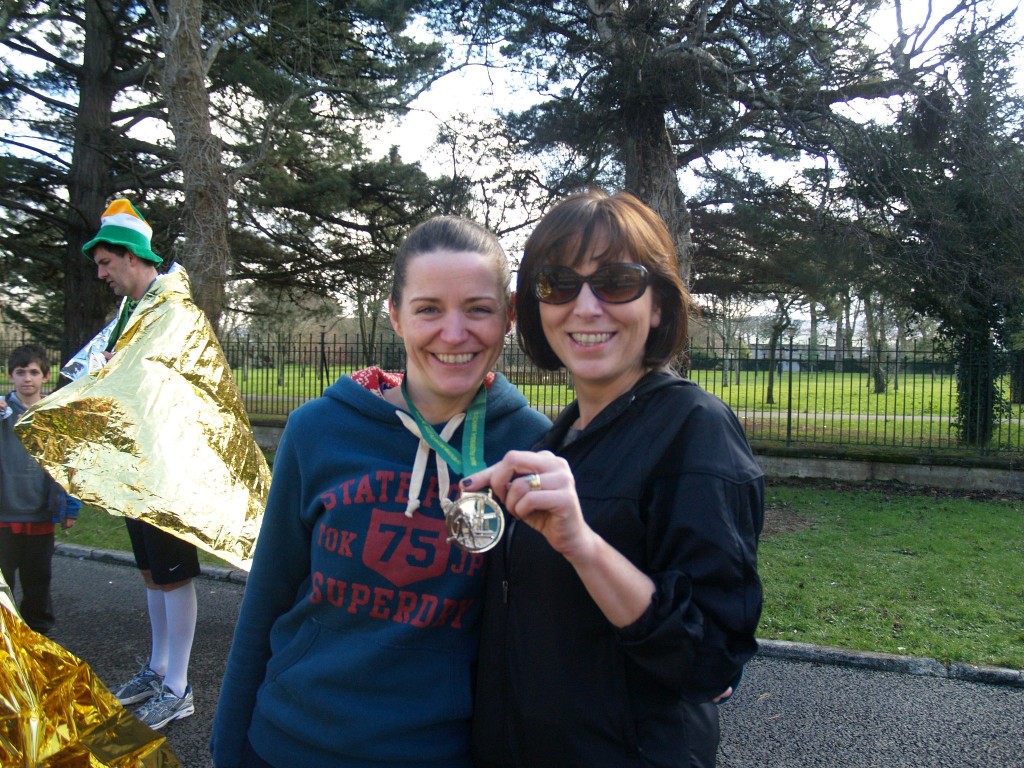 However the injuries from long distance running left a bad taste in my mouth and I just wasn’t willing to put my body on the line like that anymore. I bought a bike and decided my next challenge would be to cycle the ring of Kerry. All the advice was that cross training was the only way to go given my back problems. Completing a marathon makes you realise that limits are all in your head. If you believe you can do something then you can do it. Life is just too short to waste time thinking   ‘I’d love to do it but I’m not able’.

So I had a lovely summer last year cycling the roads with the odd 5km/10km run thrown in for good measure. Swimming had been in the back of my head for a long time – all of my adult life if I’m honest. However I have always pushed that particular challenge to the back of my mind. Although at this stage I had completed a marathon, cycled 180km of the ring of Kerry, the thoughts of swimming even just 1 meter outside of my depth brought fear and dread out through me. 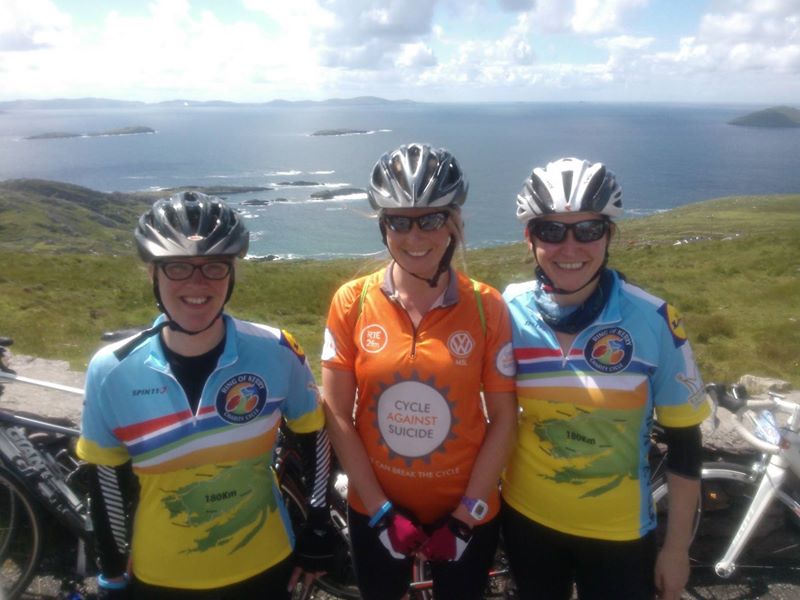 I started beginner’s lessons in the complex last October. Enough was enough! And I mean beginners – the baby pool for 8 classes. I was brilliant (of course I was – it was 2 foot deep and 5 meters wide!). We came back for the next lot of lessons – I got bunked up to intermediate as they hadn’t enough instructors and I was too strong for the beginners apparently. Sadly the step I was bypassing en route to intermediate was where you learn to breathe. There were 12 of us and I was the only one who couldn’t swim the width of the pool. I barely held it together for one class. After paying for 8 lessons I walked out of the first one shaking, broken and never went back. I was gutted.

Then in December I got wind of the Triathlon club launch night for their Beginner Tri programme. My training buddy Sinead had been hinting towards training to do Triathlon all summer and although my confidence in the water had definitely been more hindered then helped by my experience at swimming lessons I decided I’d go to hear what they had to say anyhow. 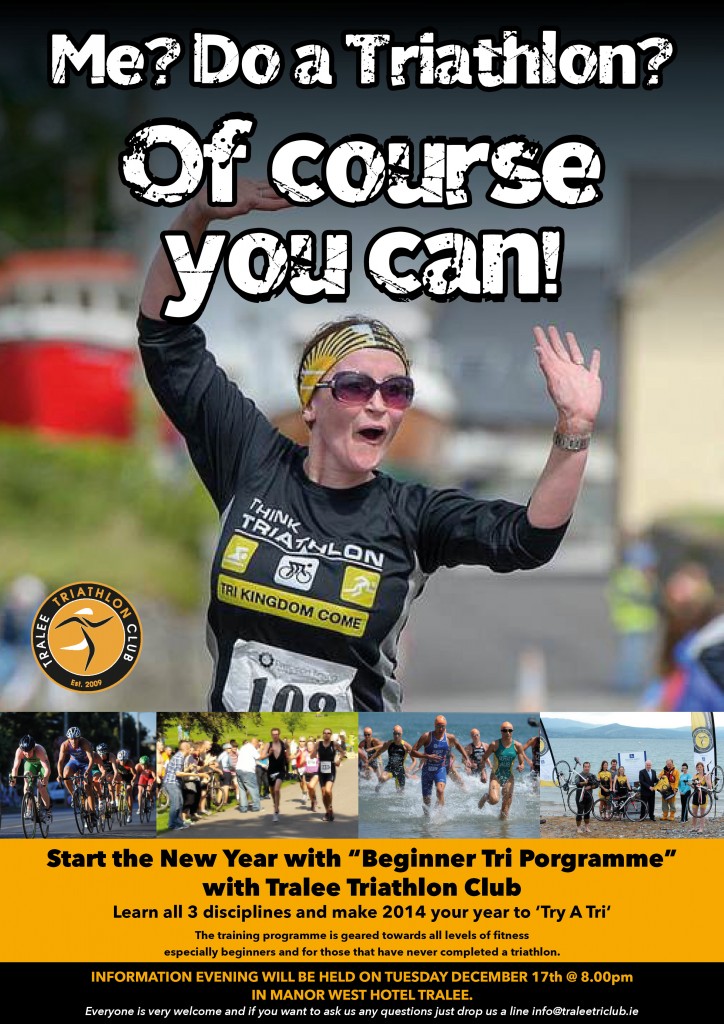 Now obviously I’m an easy sell … it took Marcus a few days to convince me I’d run a marathon – this crowd had me in 30 minutes. What a group. The training plan, the support, the encouragement and the people from previous years who had all been there themselves with their fear of either the swim, cycle or run gave me a major confidence boost.

There was still a small matter of having to learn to swim. Classes started after Christmas and I was back in square one – the beginner’s lane of the beginner’s lessons. We spent more time laughing at each other than we did learning to swim – this of course was down to the nerves as to be fair the others were as afraid as I was. I still hadn’t cracked the breathing by the time open water lessons began in May. 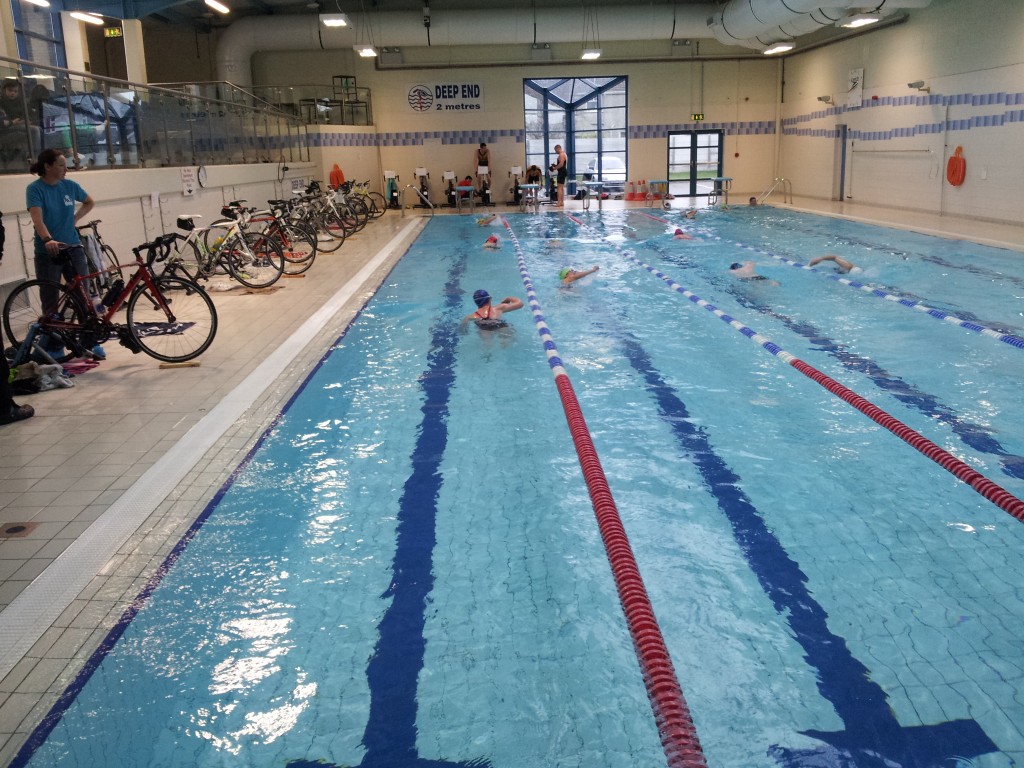 Thankfully the open water lessons were all held in our depth out in Fenit so I turned up for most of them. It was clear I was miles behind everyone else though, but at this stage I was determined – if everyone else can do it then so can I. I knew if I just stuck with it that one day it would all come together although I couldn’t swim 20 meters without stopping for air. The biggest factor in not giving up (as I was clearly not catching on to this swimming lark) was the support and guidance of the club. The beginners who started with me – all stronger swimmers – never left me out or swam off without me. I met a very special group of people this summer and I will be forever indebted to them. And then there were the more experienced members and the committee. Always there encouraging us and scoffing our doubts that we may never complete a triathlon. 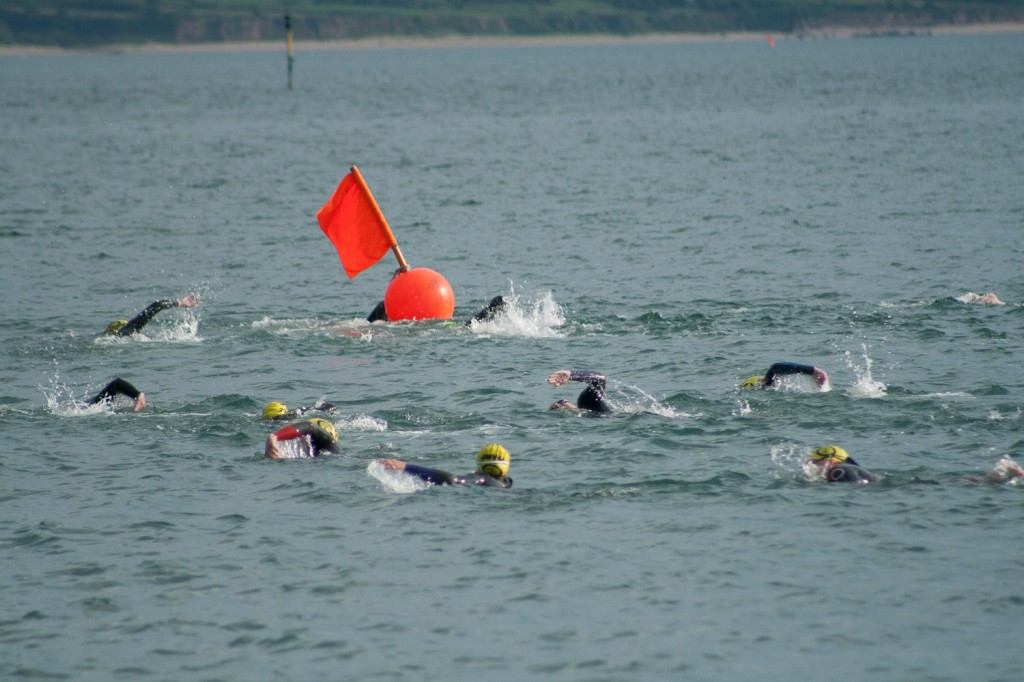 I can’t stress enough to people who are afraid of going out of their depth how beneficial a wetsuit is. Very quickly I gained full confidence that I could not sink, and even though I could not swim with my head in the water I made it out to the first buoy on June 17th.  This was the day Annie Horgan convinced me to try the mini training Triathlons organised by the club to give people practice doing all 3 disciplines. I thought she was mad….hadn’t she seen me in the water??

These were her exact words :- “It’s a training session not a race, a few beginners are going to the first buoy and others are swimming across, even if you did a 5min swim, it’s all about doing it and partaking in a club event…..and we’ve food after in Mikes!”……SOLD! 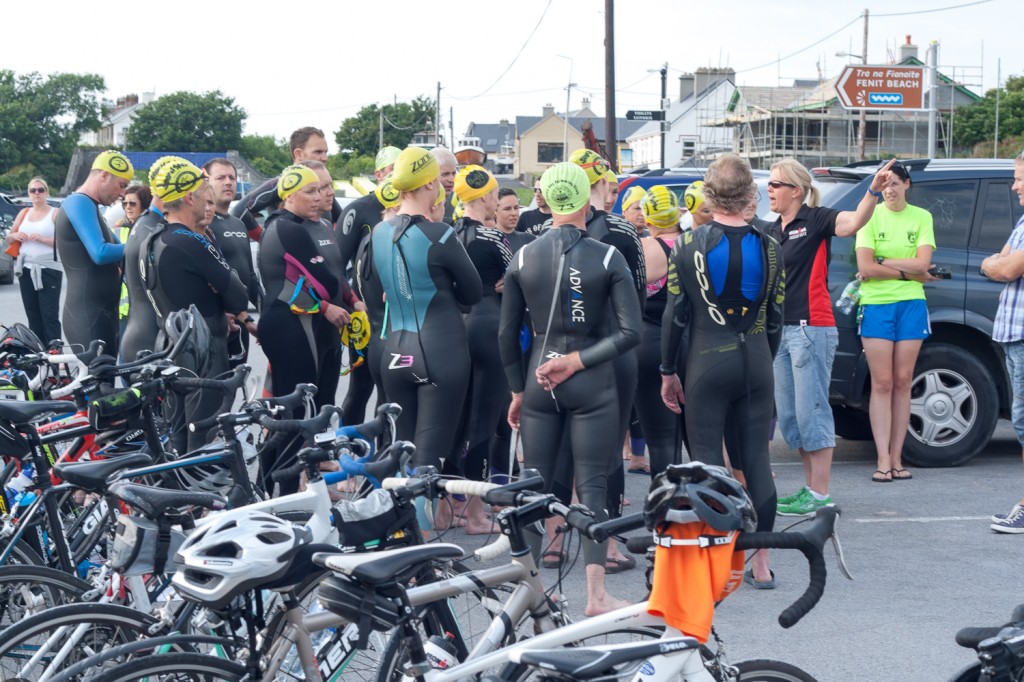 Yes it was embarrassing threading water between the first buoy and the shore as I was too exhausted to swim back in. Poor John Edwards on his kayak pleaded with me to put my head in the water but he may as well have been pleading with a brick wall. It wasn’t going to happen! (Top tip – it is exhausting to swim in a wetsuit with your head out of the water!!). I’d say it took me ten minutes, if not longer just to swim 100 meters! I was exhausted on the cycle as the swim had taken everything out of me and the run finished me off altogether. But here’s the funny thing – although I thought it was hell I was ecstatic after!! 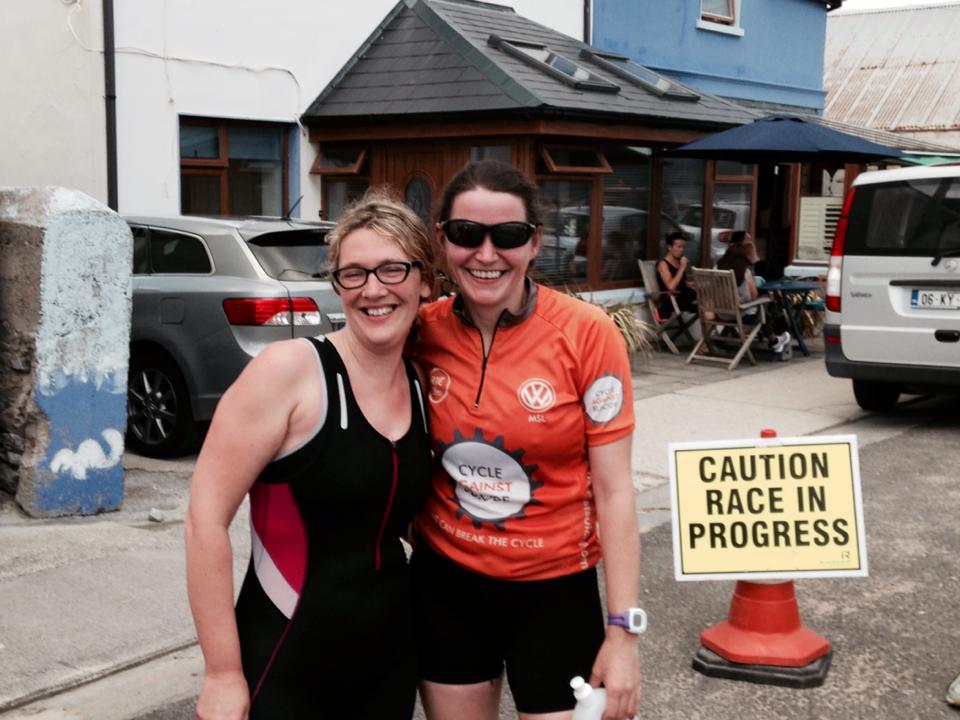 I still had it in my head that I wanted to complete the sprint distance Triathlon and the only thing holding me back was still the swim. All I can say is I kept at it. I signed up for the sprint in July even though I still could not swim with my head in the water. But I still gained confidence in transitioning and my arms still grew stronger from dragging my body through the water as often as possible! With three weeks to go my confidence diminished and I started looking at relay options instead. A week later finally and inexplicably I swam about 50 metres with my head in the water and actually managed to breathe while doing it. I was ecstatic. A few days later Sinead Kelleher took on the shore to slip swim. I stopped loads as having my head in the deep water was still disconcerting but I knew then I could do it. I had 1.5 weeks to go. After a swim class with John Edwards, John O Sullivan a fellow triathlete (I can say that now!!) refused to let me bolt to the shore when we were told to swim out to the 2nd then 1st buoy and into the shore. The tide was well in on the day making it a fairly decent length swim in very deep water. I can assure you I tried to make him go without me but he wouldn’t budge. I did it and this was another massive confidence boost for me.

On Monday August 4th—– 6 days to go…. Niall O Loingsigh’s turn… Another Triathlon club stalwart! He brought me slip to shore for the first time. I was terrified. I couldn’t eat all day before it – to be honest I couldn’t eat for 2 days after it again but I was now certain that my shore to slip swim had not been a fluke. I did one more slip to shore on Wednesday evening with Sinead and then I just calmed down. I knew I could do it. 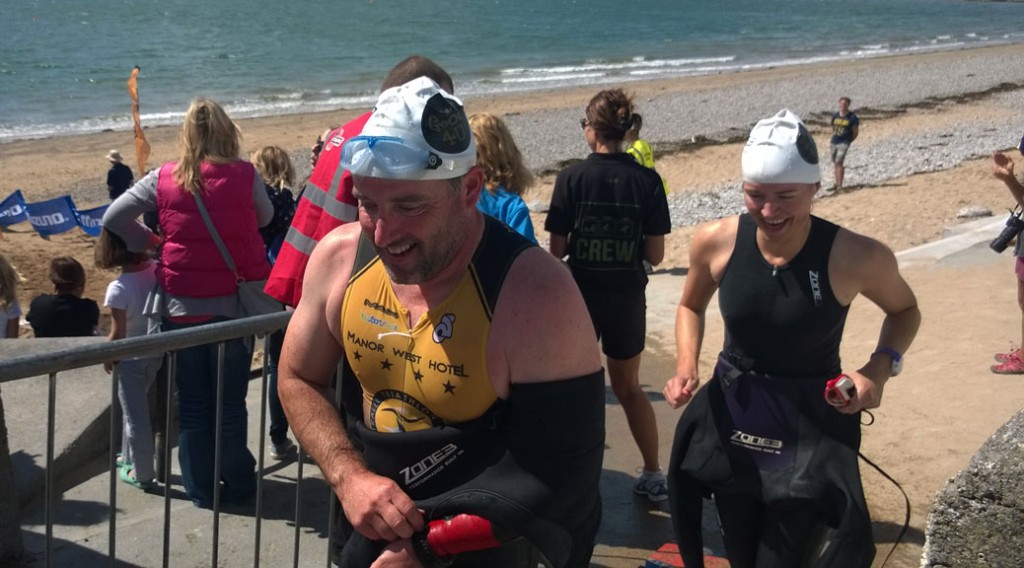 All you can hope for on the day of the race is that conditions will be kind. It was a beautiful day – but I knew when I looked out the window that the trees were swaying ominously – the dreaded wind. We were used to glassy conditions in Fenit all summer. At this stage it didn’t matter anymore. There could have been a tidal wave and I’d have got in. I had worked too hard for this. I completed the 750m swim in just under 22 minutes. I was ecstatic! 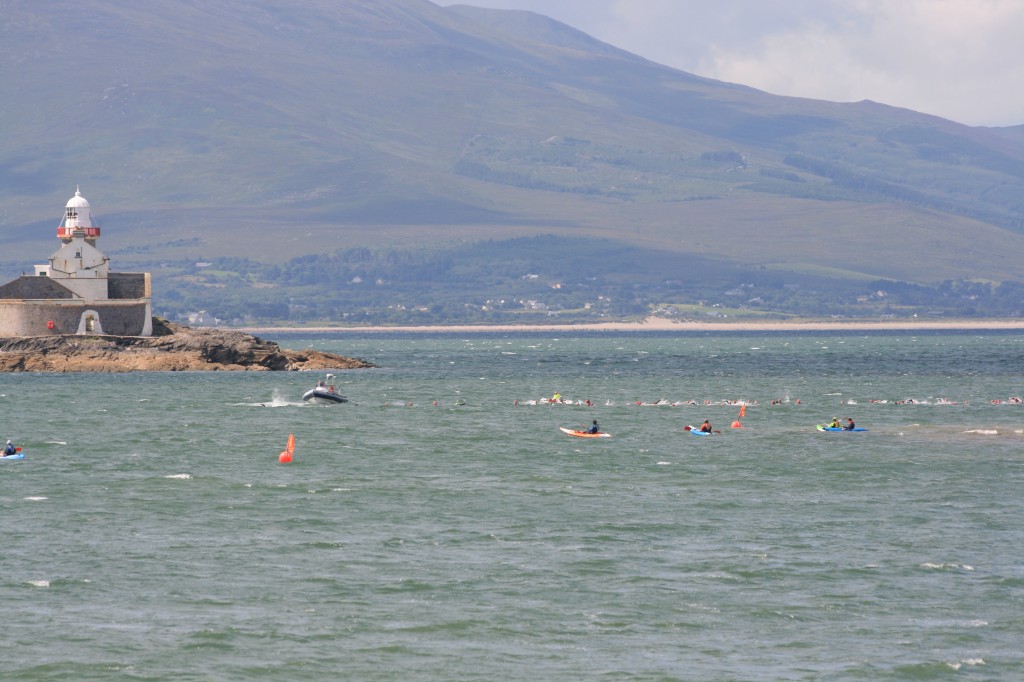 Landers Tralee Triathlon- The Swim! I’m in there somewhere!

My bike was strong but I had nothing left in my legs for my run. I didn’t care. I was about to cross the line to complete my first sprint triathlon in 1 hour 46 minutes. I don’t know where I got the energy but I sprinted to the finish line and just hugged everyone I could get my hands on when I crossed it. It is my biggest achievement to date and I can honestly say my life has changed so much for the better after the summer I have just experienced. 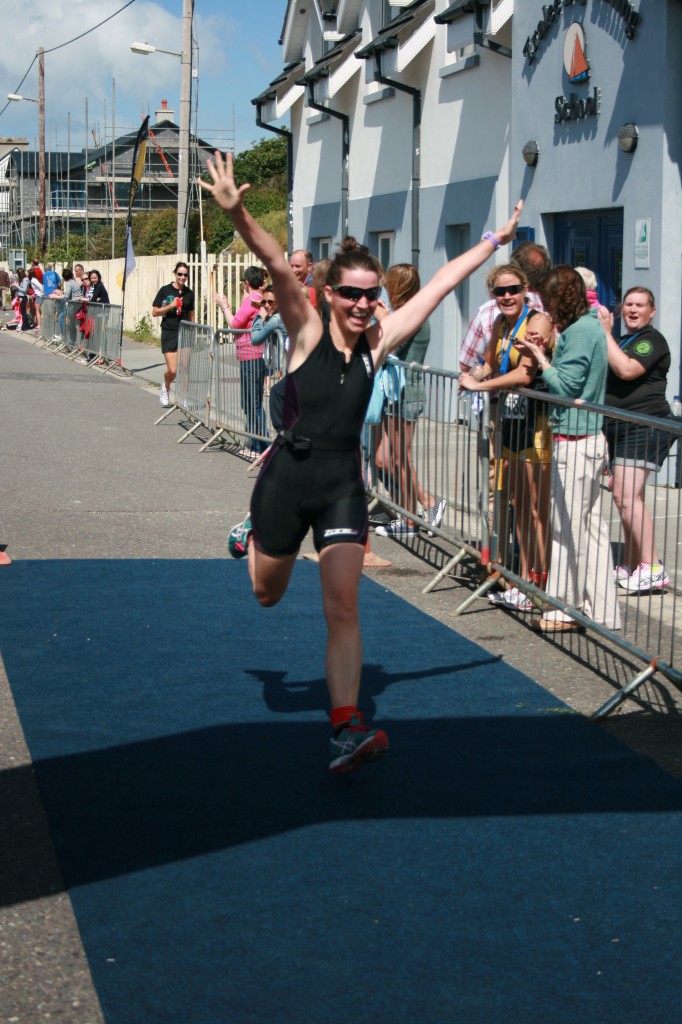 You can’t get me out of the water now – I love it. I’m still pinching myself that I can swim confidently now and I’m not sure that it has really sank in at all yet that I have completed a triathlon! I’m still awestruck that I can swim! 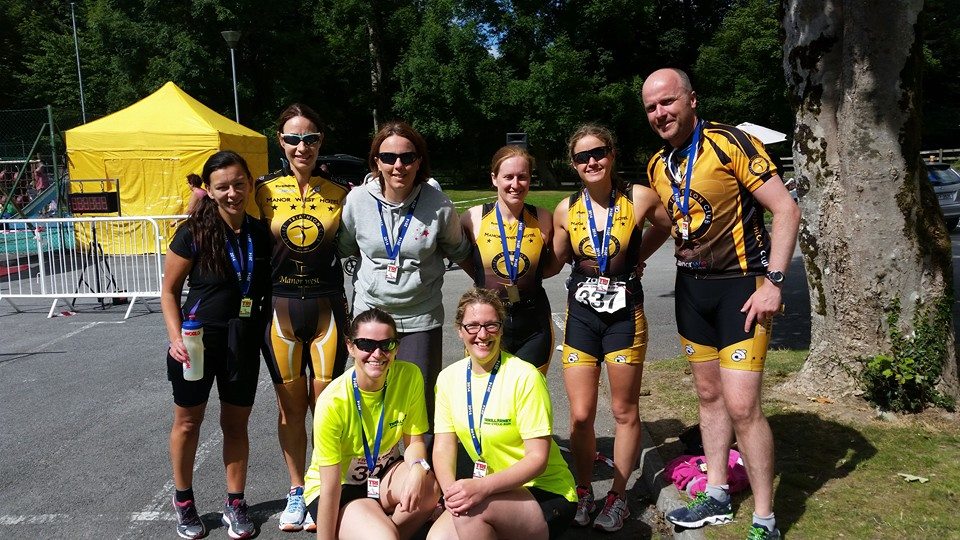 I honestly don’t think I would ever have been able to do any of this without the club around me. When I tried to go it alone on the swimming it was a disaster. This has been the summer of my life and I have to thank Tralee Triathlon Club for that.

ANYONE can do a triathlon —- I am the living proof of it!!