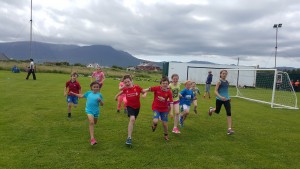 Anna Grealish who works with Triathlon Ireland as their Munster Development Officer, came to Fenit to facilitate the first Junior training session. There was also an information briefing for parents interested in joining the Junior Club committee. 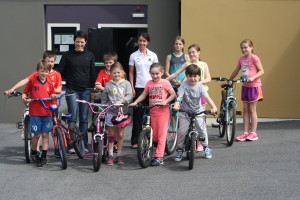 Anna, probably formally better known by her maiden name, Crooks, is one of the top female triathletes in the country. She is no stranger to race podiums, and topped the National Series rankings in 2013 (second in 2014).

Anna went through all the essentials of setting up a Junior Club.

Junior Sub Committee
A sub-committee must be formed with 2-4 people. Main roles may include a Chairperson, Child Officer, Junior Lead and Junior Coach. The Child Officer is typically the main link between the Junior Club and the main Club. This person sits on both committees and acts as a liaison between the two. The Junior Lead is usually responsible for overseeing the Junior club activities. The person in this role may also be the Junior Club Chairperson, depending on the size of the committee. The Junior Coach (or Coaches) then takes responsibility for co-ordinating, planning and/or running training sessions.

The committee is yet to be officially formed, however there has been a lot of interest in the club. All interested parents are invited to express their interest in joining the committee by contacting the club. 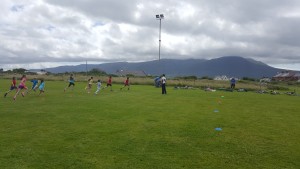 Flying it in Fenit!

Basic Requirements
Child Protection is probably the most important consideration in setting up any Junior Club. All coaches will be expected to complete Garda Vetting through Triathlon Ireland and the club will be abiding to strict guidelines on child protection. A statement on the Clubs policy in relation to Child Protection and on Health and Safety will be posted on this website shortly.

A number of Committee members will also be completing Code of Ethics/Conduct training through the local sports partnership. Again, please let the club know if you are interested in completing this training. 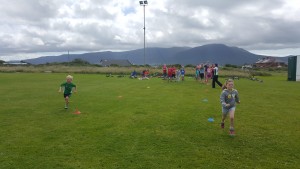 Coach Education
The coach training structure is undergoing some change at the present within Triathlon Ireland. The ‘Tri Leader’ course is now the first step on the coaching ladder and is a pre requisite to the new Level 1 coaching course. There is some cost involved and a limited number of parents will be attending, so please get in touch if you have previous coaching experience and if you are interested in getting involved. This course is delivered over two days. It is aimed at parents and volunteers and covers all the basics of how to coach, dealing with children and health and safety.

Training Session
Anna then went through a sample training session with the children. As the weather was changeable, and plans had to be put in place, we decided that we would not go ahead with an open water swimming session. 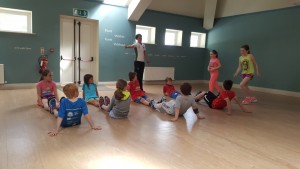 We started off with an indoor session at the Fenit Parish Hall. All aspects of the session were delivered to the children through fun games. The warm up consisted of games such as ‘ladders’, ‘jail’, ‘Spiderman walk’, ‘gorilla walk’ and ‘frog jumps’. All these games were very familiar to those of us who have taken part in the club strength and conditioning classes. Through these games the children raised their heart rates, and did what the adults would recognise as your everyday lunges, squats, mountain climbers and mobility exercises. Where the adults may have had red, sweaty, pained faces, the kids really enjoyed it and they giggled and laughed throughout the session.

More games followed in the main set, and then we hit the bikes. 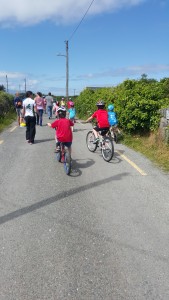 The Club would like to thank the nearby Samphires Soccer Club and Mary Kelly, who kindly allowed us to use their training pitch for the outdoor bike session. We were lucky with the weather as the sun was shining for the whole session, and there was no rain. 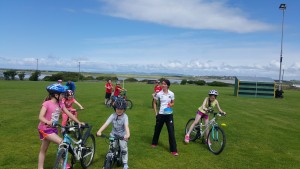 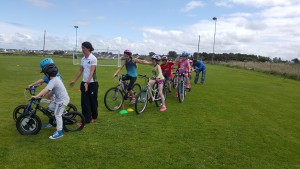 Anna took the children through some basic bike handling skills, running & cycling games, transition practice and the session ended with a Duathlon (run, bike, run). The competitive spirit came through and there were some very determined efforts made on the day. 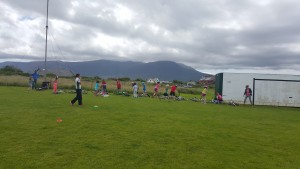 We the headed back to the hall for a light lunch and fruit, which was followed by a questions and answers session before we wrapped up.

Anna was a mind of information and answered all our queries and questions and offered some very helpful advice, not only on the triathlon side of things, but also on the logistics, and on realistic goals for the Junior Club for the initial years in operation. As a small club, we need to be realistic with our goals and the resources available to us.

After we said our goodbyes to Anna a few of us headed to Fenit for a swim, and a little aquathon!

Membership
Initially, membership to the Tralee Triathlon Junior Club will be restricted to the children, grandchildren and siblings of Tralee Triathlon Club members. This is necessary until we, as a junior club are confident enough to move forward with bigger numbers and until we have a few coaching courses under our belts.

Members who would like their children/grandchildren/siblings to take part in Junior Club activities for the rest of the year will find membership details in an email from the committee shortly.

Again, thank you Anna, for coming down and running the session. The children had a great time. Thanks to the parents who were able to attend and help out on the day… Lorraine Bowler and Alan, Jean Foley, Randall Wharton, Niamh O’Connor, Maura Shortt and Anthony Griffin.

I also want to say thanks to the parents who have expressed interest and who supported the idea of a Junior club from the start but who couldn’t make it on Sunday.

Thanks to the committee of Tralee Triathlon Club, who have been more than supportive. Thanks especially to Norman, our Chairperson, who called out and touched base with us a couple of times on the day.

Finally, thanks to the children who were really well behaved and whose talents shone through. The future for the Tralee Triathlon Club is looking very bright!