Funny thing training. When you think about training and the volume that you need to complete so you can finish the half iron man in one piece it can be a bit off putting .

When I looked at it first it reminded me of the first time I looked at the Training that Oliver Harkin ( Club half iron man coach ) uploaded on to training peaks .My first reaction was what the f*’k.How can I train when I don’t understand what I am to do . There was so much jargon I again though this is going to be an uphill battle to get a training plan in place . A quick search of the web for some simple training plans and again even the simple plans would need an interpreter to tell me what to do . Frustrated again .

What to do .First thing was break down Olivers plan on a white board. I would advise anyone to get one of these . I made it simple .What do I need to so on Monday eg turbo one hour , stretch 10 mins .. So I now had a daily simple plan . Next was to map out the week.. That was done and I now had a very simple plan for the week.

The next step was where being part of a club comes into its own. Training may seem tedious but when done in a group setting it get a whole lot easier .The club decided that it would get a hall for two days per week and run a club turbo.I said I would lead the sessions.Again I was a little apprehensive .Would the session be ok , would people like the session and even more what would they think of the music !!!!! .The sessions have been brilliant .At a cost of 1 euro per session they have been a hit . Great post on the sessions on the club face book page if you want to check it out .Try and do a one hour turbo session on your own and do a one hour session with a group .No comparison on how a bit of company can make the mudane seem enjoyable. Hope to see more at the sessions weekly. 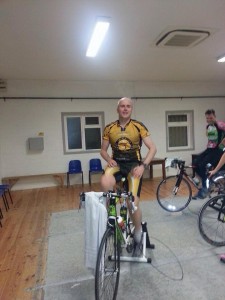 Next was the dreaded swim. Work hours are manic at the moment so how do I get good swims in at odd hours .I cant make the club sessions so what to do .. Norman gave me a heads up that there was a masters swim group that swim at 10 to 11pm on Tuesdays and Thursdays. Seems a bit mad but sent a text to Paudie to say I was interested and set up a swim on a Thursday night. I was a little nervous again as the term masters had me thinking I would make a fool of myself.. Annie agreed to try the sessions out also so off we went.Thanks Annie .. Got there a little early as not sure what to expect . Little nervous before we got in to the pool,  little like ducks out of water ( pardon the pun ) , lots of people turnedup and  Ger welcomed the two triathletes to the session and after a bit of banter off we went .. Warm up of 800m . Oh my god I thought .. Annie and myself in the same lane motored on . Ger gave a few hints and tips and very quickly the hour was done and 1800m completed . It was even a bit fun .Ger is the coach and some people can describe their sarcasm as subtle , not him , his is as blunt as I have ever heard describing the efforts of some .. Really good fun and a great bunch . That’s 2 swims per week sorted again with a great gang . 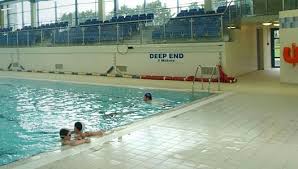 I love the bike and long spins on a Sunday . We have a great cycle group that goes out on a Sunday led by Nicky or our ” Nidge ” .Nidge the leader sets the route weekly and they are mighty tough sessions . I am partial to a cuppa and on the first few spins I had the cheek to ask could we stop for a cuppa and was told no problem as long as the spin was over 120k he had no problem with a stop.. I think you get the picture .. All jokes aside it is a great bunch .You are looked after if you find the session tough , the pace is controlled by Nidge and everyone finishes together . I have also learned that Annie develops a bit of the old  tourett syndrome when cycling descents as I have never been cursed at as much passing someone as on theCastleisland bypass at 50 kmph. There is tea every weekend with plenty of banana cake and brack after the spin with a chat .. I really look forward to these Sunday spins .. A 45 min swim in the afternoon makes me feel no guilt at all when I dig into the Sunday dinner. 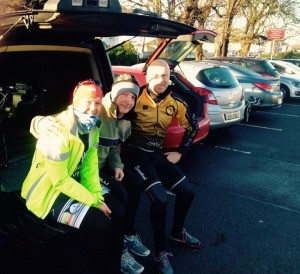 The club also has a great Wednesday run session with Maria but I needed to fit one more in so again a rally call on messenger and lo and behold we now have a running group that meets on Saturday evenings . This is the long slow run and it is a great session as everyone is in good form on a Saturday evening and judging by the plan I received from Catriona last night it is going to be a great run weekly ..Another training session sorted ..

Great quote from Catriona last night “Triathlon does not build character , it reveals it ” .
What a great gang of characters our club has…