The BMW National Series is Ireland’s largest triathlon competition featuring 17 events in some of the most scenic and exciting locations in Ireland.

Athletes must complete four races (with at least one sprint and one standard distance) to qualify for an overall series ranking.

Males and Females are ranked separately with overall and age group rankings displayed.

The BMW National Series is also used for scoring points towards the series Club Championships. In order to score an athlete must be registered as a club member at the time of competing in each race.

Note: In order to receive BMW National Series and Club Championship points you must hold a valid 2018 Triathlon Ireland Race Licence Triathlon when competing in the event.

Any triathlon event in Ireland can apply to Triathlon Ireland to be included in the National Series for a given season. There is a strict criteria that an event must prove prior to being awarded the honour of hosting a National Series event. The locations for the 2018 seasons are highlighted on the map below and as is the norm in Ireland are typically in stunning locations. 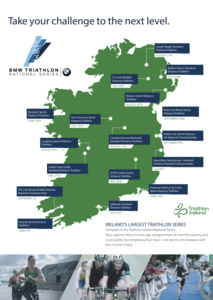 Note: The TI Member rule means that ‘One Day Membership’ holders, Category 1 athletes and triathletes who are members of a foreign triathlon association are excluded from the calculations.

To calculate the points for the male in 10th position:

Number of points for 10th male:

To calculate the points for the female in 50th position:

Number of points for 50th female: